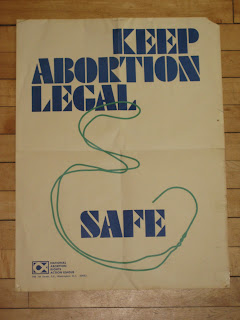 My two pregnancies occurred well before Roe vs. Wade came before the Supreme Court. Options for abortion were few and far between. In September 1966, I was a freshman in college in Washington DC, had rarely had a date in high school, and was naïve about my sexuality and about young men. At the first dance of the first semester, I met a handsome, freshman football player. Having had a jovial evening of dancing and some drinks, I agreed to go on a date with him. After several dates and assurances that we had protection (little did I know about diaphragms or the pill at that time), we consummated the relationship. I immediately got pregnant.

Telling my parents (especially my father) or leaving college were not options available to me. I had to raise money for whatever way I could find to terminate the pregnancy. I worked in a department store as a clerk. What made the job very depressing was that I was placed in infant and children’s clothing and that I had morning sickness all day most days. I learned of a “doctor” in downtown Washington DC who gave injections said to terminate pregnancies. I had the injection, which did nothing to terminate the pregnancy, but left me spending most of the night wrapped around a toilet seat vomiting. I have no idea what the substance was and was too scared to ask.

Through a friend from high school, I learned of a Dr. Milan Vuitch who provided D&Cs. If you read about the history of abortion in America, you will come across his name. He was a pioneer in making abortion available to young women and spent considerable time in court fighting for this right. His office was barebones, but sterile. He did not give anesthesia, but used the instruments efficiently and carefully to terminate the pregnancy. I bled for a week or two afterwards, and then all was back to normal. During the summer, I did tell my mother about the abortion. She took me to her gynecologist to have a check up. Thankfully, the gynecologist, who was my father’s colleague in the same hospital, and my mother kept my secret.

Three years later, I was working in Boston, having taken a break from college for a year. I met up with an old friend from Washington DC. After dating for some time, I got pregnant again despite using protection. I was already accepted to finish my degree at a college in Massachusetts and again needed to terminate the pregnancy. While abortion was still illegal in the U.S., by this time, some churches were providing information on places offering safe abortions. A Unitarian minister gave me the number of a group in Towson, Maryland, that conducted a secret abortion clinic with physicians from Johns Hopkins Medical School who believed that abortion should be legal.

When I called them, they told me to stand alone at the appointed time in front of the out-of-business movie theatre in Towson with an envelope in my left hand. As I stood waiting, a black Cadillac pulled up. I got in and found two other women already in the car. We were taken a long distance into the country to a farmhouse. We sat in a waiting room and one-by-one were called into the medical room. The D&C procedure was conducted by masked practitioners: a doctor and a nurse. We were told ahead of time the masks were necessary to protect the identity of the medical staff. Because I had scar tissue from my first abortion, the doctor scraped a long time, particularly at the point of the scar tissue. This process was quite painful. I began to bleed a lot. They offered to take me to have me stay overnight to be watched, but I insisted that I be taken back along with the others.


I bled heavily for three months after the second abortion. Again I told my mother what I had done and again she took me to the doctor. While he did not take kindly to my return visit, he made sure I was healing as best as I could.


Since that time, I have never been able to have children, which I would have loved. While I do not regret my decisions, I do regret that safer and less painful methods were not available. I also regret not having the courage to discuss my situation more openly. I am pleased that women today have more outlets for obtaining abortion that in the past. As the NARAL poster says, I hope that we can keep abortion safe and legal.

Join our email list to stay updated
with the latest at Mabel Wadsworth Center!